Diane Porter took this photo of a Northern Cardinal in her yard.

One of my favorite daily rituals is filling up the bird feeders on my windowsill. I live on the fourth story of a seven-wing brick institutional complex ( the convent wing!) A large maple tree stands outside my bedroom windows. I have three feeding stations on my two windowsills:  a plexiglass suction cup feeder,  a suet feeder, and a fruit and nut bird cylinder.  In the summer, I have a hummingbird feeder as well.

I don’t have a camera good enough to get sharp closeup photos of the birds who visit my feeders. For example, this mockingbird, perching on the fruit and nut cylinder:

This mockingbird claims all the feeders as his own, and chases the other birds away. Eventually, though, they get theirs.

Here is a photo of a Northern Flicker, taken by Seabrooke Leckie: 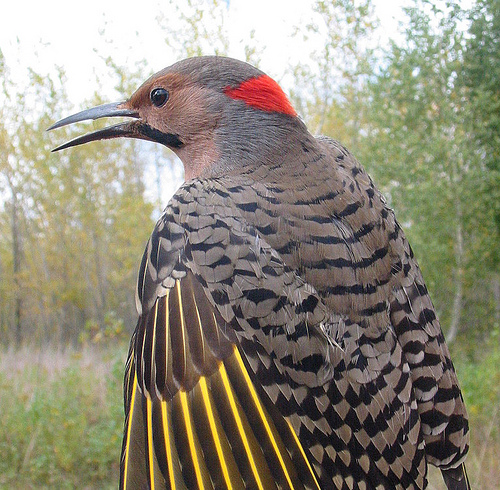 Four of these beauties come to my windowsill ( one at a time! I see the other three waiting their turn in the tree!) in the winter.  Here’s a poem I wrote about it:

Two Feet from a Flicker

Two feet from my seat at my desk

to the windowsill where

on the other side of the glass

a Flicker feasts on the seed and nut bar

I have provided for my entertainment

If he sees me, he doesn’t care.

I try not to move too much.

I can see his ears,

a slight bulge under his feathers.

I can see the sun shining off his black eyes that are all pupil.

His long beak, longer than a Red Belly’s,

pokes into the block of seed and nuts and raisins.

His tongue fine as a hairpin

He wears a cherry red cap on the nape of his neck,

black raindrop shapes on his cheeks,

a black necklace on his throat and gold ermine on his chest,

and as he fends off an approaching Bluejay,

His gold shafts flare out on the inside of his wings.

Oh, fifteen whole minutes I’ve had with you,